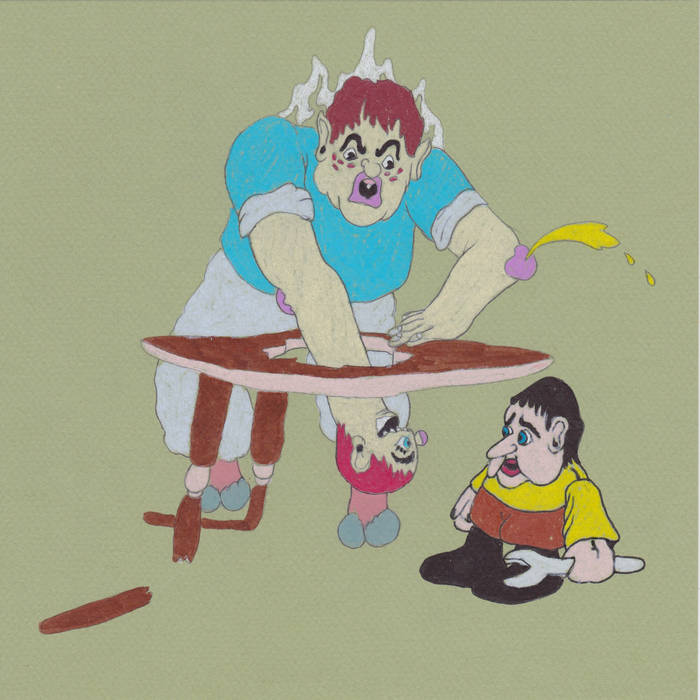 "Having explored a lot of Southern Vermont-based artists over the past decade and a half, it now seems time to cast our gaze northward. From the cold shores of Champlain comes the music of Wren Kitz, a singer and guitarist from Burlington VT. Unlike much of his earlier work, which falls into what might be called a “progressive/experimental folk bag,” Early Worm documents a harder sound. As Mr. Kitz says, “It's my rock n roll album.” And he ain't kidding. While some of the tunes were initially developed in a solo setting, their final realization was accomplished by a four piece band with cellist Lauren Costello, bassist Ross Doree and drummer Rob Voland.

The sound on Early Worm is a natural and louder progression from Wren's most recent album, the NNA cassette, Dancing on Soda Lake. One notable point of departure is Rob's drumming -- more formidably rockoid than his predecessor's. The wailingness-factor of Wren's guitar tone has also been upped by the gift of a new wah-wah pedal. His guitar now has a stuttering rawness that makes for a beautiful contrast with the sweetly flowing vocal melodies, which bear vestiges of Valentine, Vile and Young. The sound of Early Worm careens around wildly. Parts of the songs are tightly controlled compositions with traces of folkier times, but these often dissolve (eventually) in an acid bath of wonderfully berserk guitar chaos. Trying to reconcile the pieces can make your brain overheat, so don't try.

Just sit back and enjoy the rich madness of Early Worm. Its roll is not something you've heard before. Get used to it. Or get burned."

"Wren Kitz plants ululating tremors of feedback, and as he beckons them forth and encourages them, he wades in and allows himself to be carried; not away, but in concert with. This is a difficult thing to achieve; most of us, upon eliciting the positive loop gain, have to accept that we have no control, and it often will float away or burst like a bubble. Wren is a surfer, and the best surfers are artists in their own right. He also is adept at speaking to and with old tape machines, threading his effortless falsetto in and out of the adventurous treatments, and coming out on the other side with a song; it's needlepoint really, of the highest order.

Early Worm, his latest effort for Sophomore Lounge, is not a mere example of these aforementioned superlatives, but a culmination of hard work and songcraft. Wren is an empath, from a long line of beautiful big-hearted people, and for him to sufficiently be able to translate his empathy and thoughtfulness into music is nothing short of a gift. As he says within, "...Come in, come in..."; you will be glad that you did."

Recorded in March 2019 by Ryan Cohen at Robot Dog Studio in Williston, VT.
Additional recording by Wren Kitz during the spring/summer 2019
Mixed and Mastered by Ryan Power at Perfect Pet in Brooklyn, NY

Wren Kitz is a song writer and field recordist based in Burlington, VT. Wren's unique and personal style of music has been informed by blending traditional guitar-and-voice songwriting with field recording and tape collage experimentation. In attempt to develop a ghostly and contemplative form of musical expression, Wren has begun to ponder ways to break down walls between genre categorizations. ... more

Bandcamp Daily  your guide to the world of Bandcamp

Featuring interviews with the mighty Haitus Kaiyote and genre-busting L'Rain.